Termites
What is Termites?

Termites are small soft bodied insects, which many people call "white ants", There are many different termite species in Malaysia, some are important recyclers of dead and decaying timber, These species are subterranean, they constantly forage and evaluate the size and quality of food resources as they seek out cellulose, the primary component of wood. Termites live and work together in large groups known as colonies. They are divided into various groups known as castes; the Queen, king, soldiers, workers and alates.

While in the nymph state, termites diverge into different castes: workers, soldiers, reproductives and supplementary reproductives.

Most termites are workers, with soft, light-colored bodies rarely more than 10 mm long, like grains of rice. They are blind, wingless termites that maintain the colony, build and repair the nest and care for others termite. They rarely leave the dark tunnels that run from the colony through the soil and into the wooden frames of buildings. Twenty-four hours a day, they forage for food, maintain the nest, and tend the queen and her brood. Juveniles, called nymphs, groom and feed one another and others in the colony.

Soldiers are sterile, wingless and blind. They have long heads with powerful jaws and are responsible for defense colony, primarily against invading ants

Reproductive male and female termites will eventually leave the colony as adult "Swarmers" to mate and start new colonies.

The queen is the largest colony member, up to 10 cm long, about the size of the space bar on your computer. She's so big that if she needs to move, it requires several hundred workers pushing at once. She lays an egg every 15 seconds. If she dies, another reproductive takes her place. Some Queen termite can live for as long as 30 years. 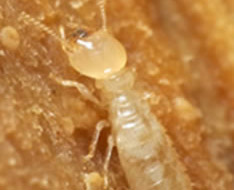 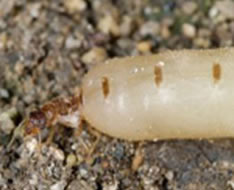 Drywood termites build their nests inside the wood that they feed on and have contact with the soil.  They also do not build mud tubes.
Another pivotal way in identifying drywood termites would be to examine the alates.  Once drywood alates land, they shed their wings in a matter of minutes, and you would find them crawling around wingless.
A close inspection of soldier drywood termites would reveal them having teeth on their jaws and having round heads in most species.  The worker termites on the other hand feed along and across the grain of wood.
The fecal pellets of drywood termites are rather hard and sand-like.  Kick-holes will be present with small granules scattered on the ground below the infested wood. When subterranean termites leave the ground, they build mud tubes or termite runways as passageways to new feeding grounds through breaches in cement and concrete.  These tunnels serve as protection against ants and dehydration.
Most species of subterranean soldier termites possess rectangular heads and have no teeth.  However, they can be easily identified by the white sticky latex that they discharge from their enlarged heads when aggravated.
Besides that, worker termites feed only along the grain of the wood.  Their fecal are rather moist unlike drywood termites.